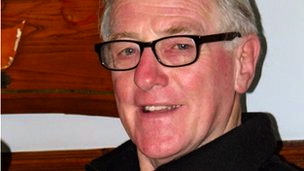 I don’t know whether either would thank me for the comparison, but an afternoon spent interviewing John Hefin and David Meredith reminded me most of trying to referee Statler and Waldorf, the two cantankerous old gits in the balcony on The Muppets.  It didn’t help that we were holed up in a ghostly pub in Ponterwyd, the proper boondocks of inland Ceredigion.

The interview was for one of my ITV Wales travelogues, Great Welsh Roads.  This edition was filming the A44 route into Aberystwyth, and I was keen to do an item about the Elvis rock, that infamous landmark at the county border.  Over the years, there have been several Elvis rocks, but the original dated from spring 1962 and the Montgomeryshire by-election, following the death of the area’s Liberal MP since 1929, Clem Davies.  Plaid Cymru, never yet elected anywhere, had put up that fine specimen of Welsh literary priesthood, Islwyn Ffowc Elis, as their candidate.  Down in Aberystwyth, that distant seaside gap in the hills, two ardent young nationalists had an idea…

“We borrowed David's father’s car, smuggled a couple of pots of paint and a brush into its boot, and then crept out of town after the pubs had shut and up to Eisteddfa Gurig”, John told me.  This was the border with Montgomeryshire, and the Aber Two thought that if they painted a big slogan somewhere to fire up the Rev Ffowc Elis’ chances, he would be practically lowering his backside onto the green benches of San Steffan.  “We went back home that night, so cocky and excited.  We were absolutely convinced that we’d done all that was needed.  He was as good as home.”  Not quite how it turned out.  As has been the case on most occasions since in the mwynder Maldwyn, Plaid limped in fourth. 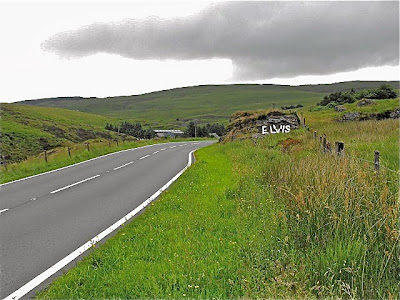 The provenance of the Elvis rock had been a bit of a mystery – legend even – for decades, and I was thrilled that John and David had finally agreed to fess up after so many years.  The original intention had been to film the interview by the rock itself, but it’s a cheerless, inhospitable place at the best of times, and that cold October day was far from that.  So we’d decide to film footage of the rock and the road, and then retire to the George Borrow Hotel in Ponterwyd for the interview.  We were all freezing; coffees and brandys were quickly downed.  I thank the brandy for the appearance of Statler and Waldorf, for John and David, as soon as they sat down and relaxed, mateamorphosed into one of the funniest, and most natural, double acts.  It still stands out as my favourite ever interview, though I doubt that my editor, who had the impossible task of slicing down the rambling hilarity into broadcastable bite-sized chunks, would have felt quite the same.

Like all good comic duos, there was the jester and the straight guy.  David, in all his lugubrious magnificence, was the erudite clown, mugging to me and acting out the absurdity of painting a slogan on a lonely rock in the middle of the night.  When he had raised himself to near crescendo, John would quietly cut in with a contrary memory or an arch observation, which had us all in fits of laughter.  They riffed so beautifully off each other, and could affectionately bicker for Cymru.

The punchline to the story was all John’s.  “Well, you see, I was a good grammar school boy, brought up in the Queen’s English, so when it came to painting ELIS on the rock, it never occurred to me that it didn’t have two Ls.”  ELLIS it was, until some time shortly after when the middle L was deftly overpainted into a V, and the Elvis rock was born.

Like every encounter I ever had with John, I remember it with pinpoint precision.  My boyfriend, who met him separately on three or four occasions, said the same just now.  That was John.  He had such a luminous presence about him that you savoured every moment in his company, knowing that it would continue to nourish you long after you’d said goodbye.  He was genuinely interested in seemingly everything, and just as genuinely modest about his own multiple achievements.  To a zealous convert like me, John Hefin was the embodiment of all that made me fall in love with Wales: wit, wisdom, warmth, passion, a depth of culture and breadth of thinking, and an apparently bottomless pit of creativity.

I last saw John at the Hay Festival in early June this year.  He was obviously not so well, but he was still so full of life that it did nothing to dent my hope and belief that he’d go on for ever.  Elin and he were spending a couple of days at Hay, “going to everything.  It feeds me for the whole year,” he said, grinning with boyish delight.  As we parted, we shook hands, and held it for ages.  “Come and see us sometime soon, won’t you?” he said.  Yes, of course, I said.  I am so very sorry that I didn’t.